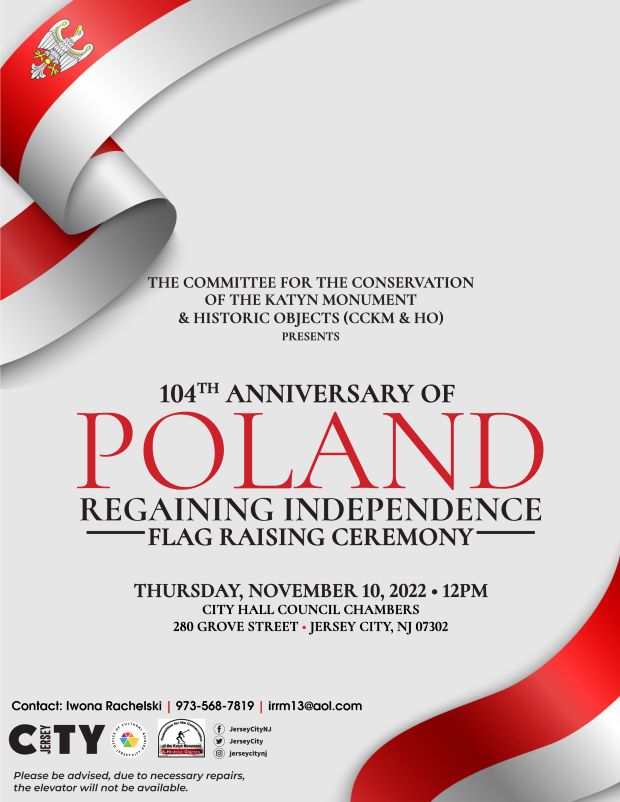 The City of Jersey City, Mayor Steven Fulop, the Municipal Council Members and the Office of Cultural Affairs are proud to recognize The Committee for the Conservation of the Katyn Monument & Historic Objects and the Polish community as we celebrate the 104th Anniversary of Independence of Poland during the Flag Raising Ceremony held on Thursday, November 10, 2022.

Poland is located at a geographic crossroads that links the forested lands of northwestern Europe to the sea lanes of the Atlantic Ocean and the fertile plains of the Eurasian frontier. Now bounded by seven nations, Poland has waxed and waned over the centuries, buffeted by the forces of regional history. In the early Middle Ages, Poland’s small principalities and townships were subjugated by successive waves of invaders, from Germans and Balts to Mongols. In the mid-1500s, united Poland was the largest state in Europe and perhaps the continent’s most powerful nation. Yet two and a half centuries later, during the Partitions of Poland (1772–1918), it disappeared, parceled out among the contending empires of Russia, Prussia, and Austria.

The 104th  Anniversary of Independence of Poland marks the restoration of Poland’s independence in 1918.  After 123 years of partitions, Poland reappeared on the map of Europe as a sovereign democratic state.

The contributions of the Polish American community in the fields of education, politics, religion, culture, science, industry and business have helped to shape Jersey City.  These accomplishments have unquestionably been an important asset to our community and to our nation’s growth and cultural development.

We urge all Jersey City residents to join in recognizing the significant contributions of the Polish American people to our great City and nation. This momentous occasion is a reflection of the camaraderie built between the United States and Poland and our enduring love for freedom, liberty and democracy that today the world is still inspired by.