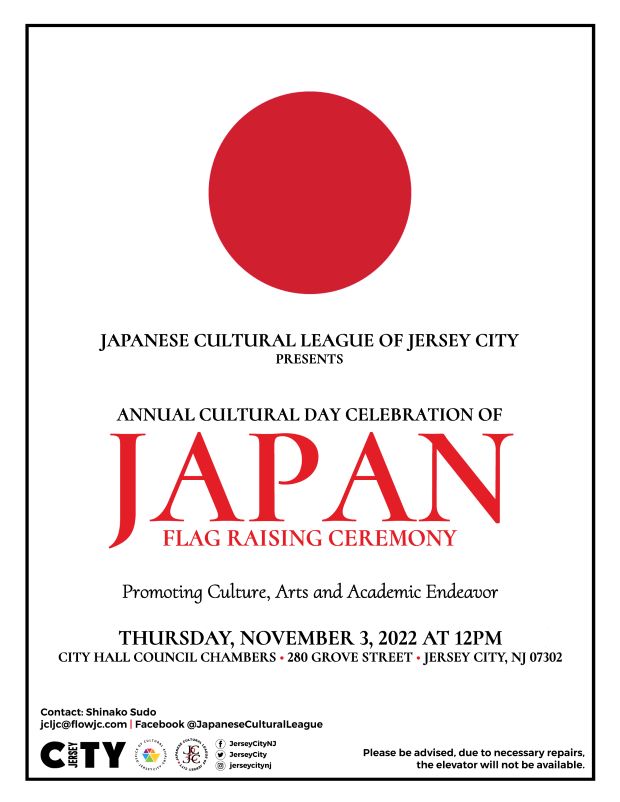 The City of Jersey City, Mayor Steven Fulop, Office of Municipal Council and the Office of Cultural Affairs are proud to recognize the Consulate General of Japan, the Japanese Cultural League of Jersey City and the Japanese community as we celebrate Japan’s Culture Day during the  2nd Annual Flag Raising Ceremony on Thursday, November 3, 2022.

Also known as Bunka no Hi, Culture Day is a national holiday held annually in Japan on November 3 to commemorate traditional Japanese culture for the purpose of promoting arts and academic endeavor as well as promote the love of freedom and peace that enshrined in the Japanese constitution. Festivities typically include art exhibitions, parades, and award ceremonies for distinguished artists and scholars.

Culture Day in Japan has been a public holiday since 1948 and was established two years after the Constitution of Japan was officially announced in 1946. November 3 is an important date because it was the birthdate of the late Emperor Meiji. Emperor Meiji ruled Japan from 1867 to 1912. In 1927, this day was declared a national holiday known as Meiji Setsu to give respect to the late Emperor. This was later changed to Culture Day.

The celebrations for Culture Day are not limited to November 3 and they carry on for some days. The various festivities held across the different places in Japan encourage the people to engage in their culture and the museums in the country are free to visit on Culture Day so that people can learn more about their culture and country.

Many prestigious awards ceremonies are arranged on this day, which acknowledge the contributions of individuals promoting the Japanese culture. Moreover, this day is important for universities and students. Schools display the artwork of their students to show off their talent.

Many other events are held on this day, including parades and festivals. These parades showcase the traditions and clothing of the Japanese culture and are organized by the government across the country.