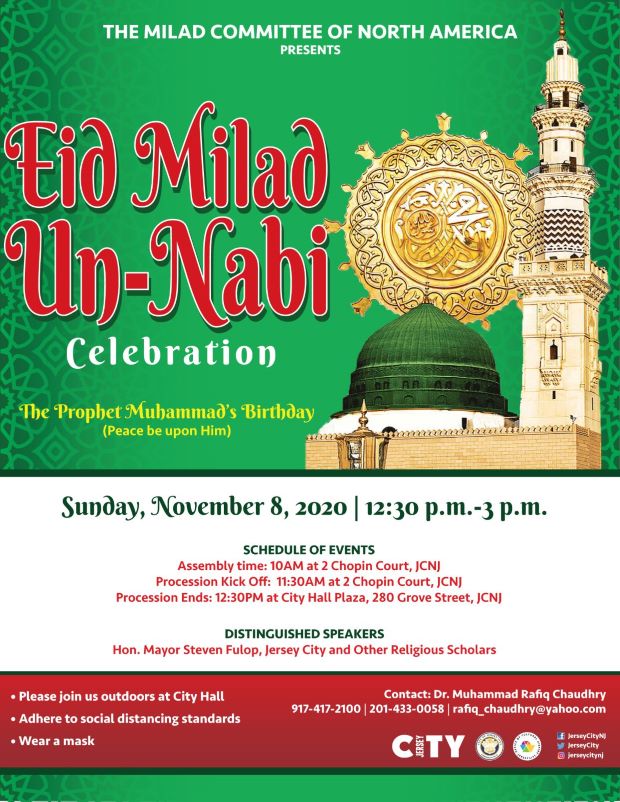 Mayor Steven Fulop, the Municipal Council Members, the Office of Cultural Affairs and the City of Jersey City are proud and honored to celebrate Eid Milad-un-Nabi with The Milad Committee of North America and the Pakistani-Americans on Sunday, November 8th between 12.30pm to 3pm at City Hall Plaza.

Around the Islamic world, Eid Milad-un-Nabi is celebrated to commemorate and honour Prophet Muhammad who is said to have introduced Islam and then, revolutionised the religious scene in the Middle East in the following years. It is believed that the Prophet was born in Mecca on the twelfth day of Rabee-ul-Awwal in 570 CE.

People on the day of Eid-e-Milad start their day with a morning prayer followed by a procession and large gathering in mosques decorated with lights to mark the occasion. Prophet Muhammad’s birthday is celebrated with religious lectures and recitals of verses from the Qu’ran. Children are narrated stories of Muhammad, about his life and preachings as mentioned in the Holy Quran. The day ends with donations towards the needy and poor people. Friends and family are also invited to be a part of the festivities.