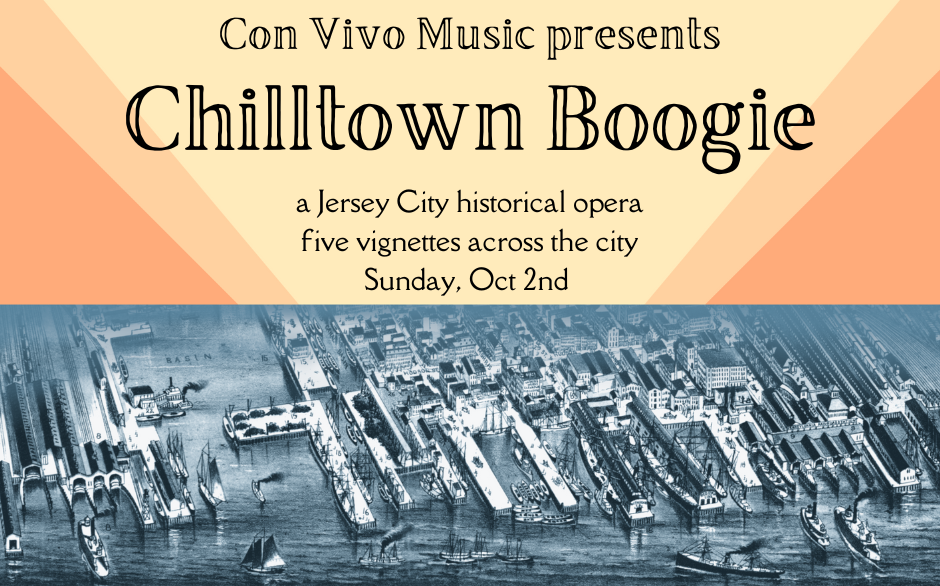 Con Vivo Music presents Chilltown Boogie, an opera by Alon Nechushtan, telling the history of Jersey City in 5 stories at 5 locations across the city. This epic production spans 150 years of history with an ensemble of singers and chamber orchestra, alongside dancers from Nimbus Dance.

Join us and discover Jersey City’s history spanning the Revolutionary War to the Underground Railroad, Morris Canal, the Hague administration, and the founding of Temple Beth-El.

THE BOATMAN – ‘the born again christian’ [1878]
A comic discussion between William ‘Billy Black’ McCullough, a former alcoholic turned born-again Christian, and his wife Mary. They discuss the growing city, Christian life, and the working banks of the Morris Canal.

THE HERO – ‘a patriotic conversation’ [1795]
A chance meeting between the hero of the day, a young Major Henry Lee, and the veteran congratulating him, General George Washington. They discuss the Battle of Paulus Hook and the American Revolutionary War, including the condition and spirits of the Continental Army and the surprise on the British forces stationed there.

THE HAUNT – ‘A most peculiar occurrence’ [1840]
Joe, a mysterious young African American, appears in a cemetery before the mystified Abbey, a kind hearted teenager. Could this be a mere random chance encounter between two complete strangers that sparks a spontaneous, riveting convergence, on a spooky Halloween night – or perhaps a wry series of unfortunate events bound by the unpredictable and astounding forces of fate?!

THE CHOICE – ‘an ethical dilemma’ [1892]
The rising star of the Jewish progressive movement, Rabbi Schweizer, reveals to a youth group the history of their new congregation, the importance of building a new temple in Jersey City for the growing community of Jewish immigrants, and the decisions he has made.

CVM works to ensure that our concerts are accessible to all. If you require a special accommodation or have specific questions, please contact us prior to your visit.

CVM’s 2022 Season is supported by The Langworthy Foundation.

Supported by public funds from the Jersey City Arts and Cultural Trust Fund.