The Art House Gallery presents PRIDE: From Raides to Parades

Join us as we celebrate the LGBTQ+ Community with this exhibition of artists whose work demonstrates the passion they embody for this momentous occasion!

The iconic Stonewall Inn in New York City was a haven for the LGBT community and in the early hours of June 28th,1969, they were raided by the police as they often were.

The constant harassment and abuse made them react and fight back. Riots began and lasted for several evenings and thus ignited the LGBT Liberation Movement.

In commemoration of this night…the first Pride March was organized by the Gay Liberation Front the following year, in June of 1970, and it is considered to be the most significant event leading to gay liberation and the “modern” fight for LGBT rights.

In the last 50 years, the LGBTQ Community has had to fight for their rights and acceptance in just about every area there is: the government, the military, the arts, sports, education, entertainment, marriage equality and much more.

Opening Reception is on Saturday, August 17th 5 to 8pm.

Gallery Hours will be Saturdays and Sundays from 12 to 3pm.

The City of Jersey City, Mayor Steven M. Fulop, the Jersey City Municipal Council and the Office of Cultural Affairs is proud to raise the Bolivian Flag. 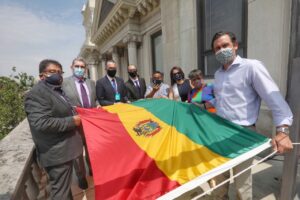 The attendees pictured above are as follows: