**All of our events are uploaded to the Cultural Affairs event calendar, as well as on the Apple Tree House Facebook event page. Within these pages, you will find an Eventbrite link to sign-up in advance, or you can call (201) 547-6921. 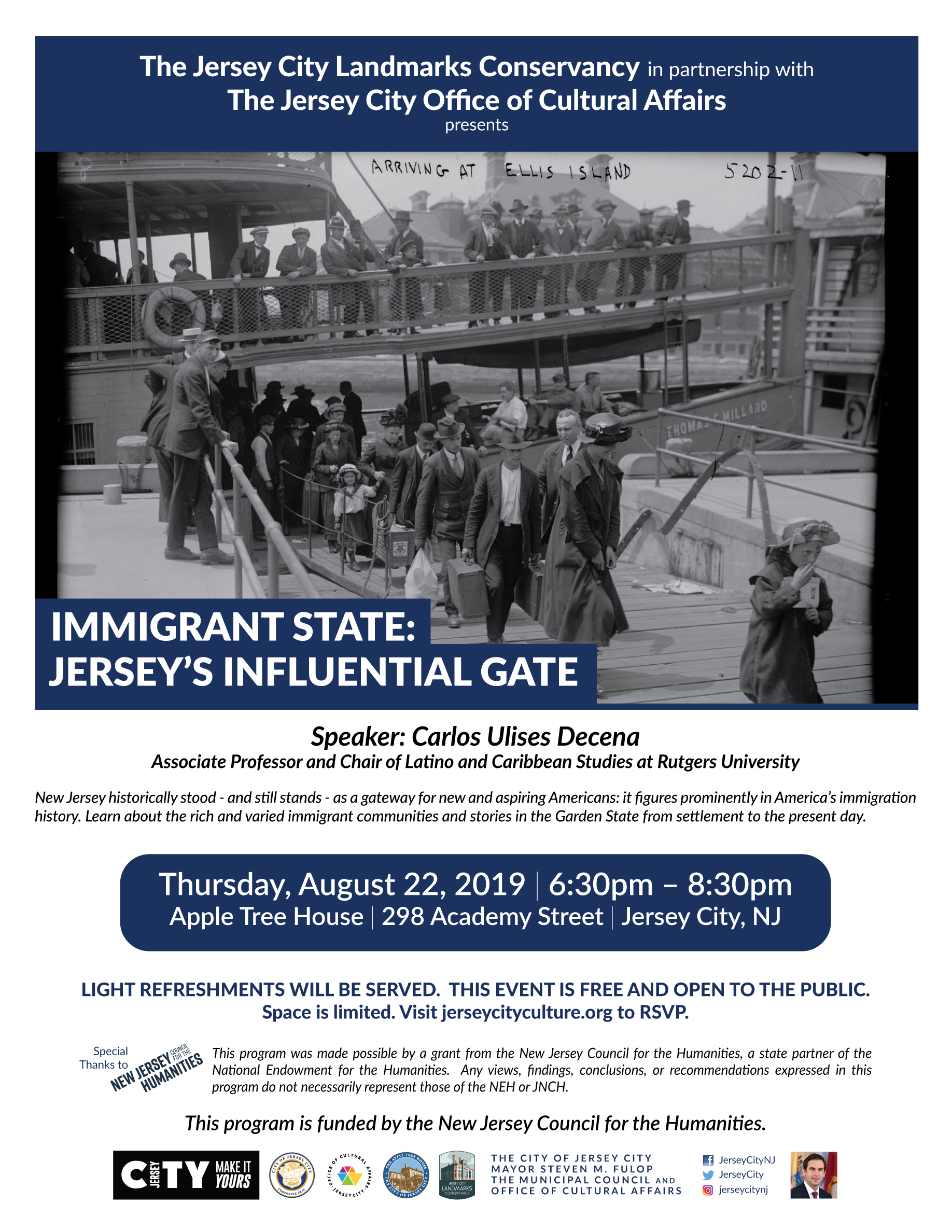 All events at The Apple Tree House are free and open to the public and in collaboration with the City of Jersey City. Because space is limited, advanced registration is required for ALL events.

Missed a lecture? Attended a previous lecture but would like to see it again? No problem! All of the lectures hosted at the house are filmed and uploaded to the website and The Apple Tree House Facebook page. Click through the videos below, courtesy of Jersey City TV:

September 6-8, 2019: History Alive: Votes for Women
It’s 1913, and, thousands of women gather in Washington, D.C.. They are there to call for a constitutional amendment guaranteeing women the right to vote. While the fight for suffrage has been going on for 60 years, this huge parade, spearheaded by Alice Paul and the National American Woman Suffrage Association, marks the first major national event for the movement. For a family audience of all ages, this emotional story is told from the perspective of the women who led the charge, and paved the way for the fight for equality.

August 22, 2019: Immigrant State: Jersey’s Influential Gate
New Jersey has a big story about immigration, packed into a small state. Many may not immediately think of New Jersey, but it is a gateway state that holds an important part of America’s immigration history. Immigrant histories in Jersey have been and continue to be distinct by region and in comparison to the rest of the country. Considering and learning more about what this means can lead to more informed communities. Through the examination of film clips, texts, and media coverage, participants will have a candid discussion about issues that are being examined and debated, nationally and in local communities, by many today.

November 15, 2018: Beyond Bathrooms & Binaries
Hosted by Hudson Pride Center. Beyond Bathrooms & Binaries is a program for creating change at a policy level for transgender individuals facing challenges in public life. Join us for a special presentation hosted by Dr. Kiki Jamieson as well as community discussion where we will explore why labels, pronouns, and gender categories are so complex and important.

The Apple Tree House, more formally known as the Van Wagenen House, was given its name based off of the story of the meeting between General George Washington and the Marquis de Lafayette during the American Revolution in 1780. Legend claims that while camped in Bergen for three days, Washington and Lafayette dined in the yard “underneath and apple tree” and discussed strategy for French Naval intervention.

1660: the Village of Bergen was founded, becoming one of the earliest Dutch settlements in New Jersey. In years to follow, the Dutch continued to share the area with members of the Lenni Lenape Indians

Between 1710 – 1721: the oldest part of the house was built, and likely included a storage cellar, large hearth and small attic

1842: the single-room house was extended to the east, which created the main hall, parlor, second floor bedrooms and attic space in a Greek revival-style fashion

1860: the second floor of the western end of the house was added and constructed in brick, which makes it easy to spot today

Early 1980’s: The Quinn family opened the Quinn Funeral Home, which operated through the 80’s, and was the funeral site of many Jersey City officials and community members, including former Mayor Frank Hague and J. Owen Grundy

1999: the City of Jersey City purchased the property, including the house

2006: the house is placed on the State and National Resisters of Historic Places

November 2017: the house reopens to the public