An event every week that begins at 3:00 pm on Wednesday and Friday, repeating until September 28, 2022

Founded in 2015 with only 5 dates and one location, we have grown to over 60 market event dates in 2022 in our Grove St. PATH Plaza location. Our Spring/Summer Season runs from May to Sept 2022. Every Wednesday, Friday and Saturday. Wednesdays & JCFriday’s are in conjunction with the highly celebrated Groove on Groove weekly live music series. Email us for more info or if you are interested in becoming a vendor artistandmakermarket@gmail.com 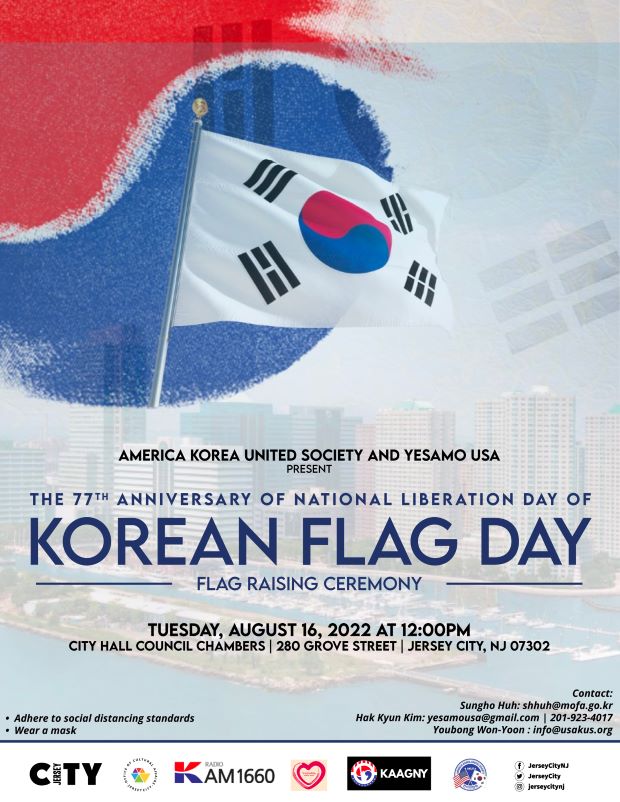 The City of Jersey City, Mayor Steven Fulop, the Office of Municipal Council and Office of Cultural Affairs were proud to recognize the Consulate General of the Republic of Korea, YESAMO USA, iPrime Academy, Savior Mission Partners and other leading Korean organizations and K media in the community as we commemorated the 76th Anniversary of  National Liberation Day during the  Flag Raising Ceremony on Tuesday, August 16, 2022.

The National Liberation Day of Korea is a holiday celebrated annually on 15 August in both South and North Korea. It commemorates Victory over Japan Day, when at the end of World War II, the U.S. and Soviet forces helped end 35 years of Japanese occupation and colonial rule of Korea that lasted from 1910-1945.

Liberated from Japan in 1945 at the end of World War II, South Korea was invaded by communist forces in North Korea a few years later. Aid requested by the United Nations helped end the three-year war and support the south on its way to democracy. A critical divide between the two nations along the center of the peninsula remains.  It took 3 years after Korea became independent from Japan (in 1945) for the nation to actually establish the Republic of Korea on August 15th, as Victory Over Japan Day, the day Japan was defeated and the Second World War came to an end.

South Korea, officially the Republic of Korea, is a nation in eastern Asia with a long history of conflict that occupies the southern portion of the Korean Peninsula. In the decades following independence, strict authoritarian rule took over the recovery of an embattled nation and its sinking economy. The first free national elections took place in 1987, passing control from a dictatorship to the people. The country’s capital, Seoul, is located near the center of the Korean Peninsula, chosen as such during the Joseon dynasty (1392-1897) for its impressive feng shui – the idea that the positioning of objects ensures health and harmony. It is home to the headquarters of Samsung, Hyundai and Kia, representing two of South Korea’s important exports: technology and cars.

South Korea’s high-tech, service-based economy, is a foreign investment success story, becoming the first recipient of OECD Development Assistance Committee funds to later become a donor of the funds. The nation has seen steady growth and poverty reduction since the 1960s and is now the world’s seventh-largest exporter and 11th-largest economy overall. It has one of the world’s largest gross national savings and reserves of foreign investment, reminiscent of a dictatorship that placed heavy emphasis on saving instead of spending. Disposable household income has increased in recent years, and South Korea’s large upper class is keen to spend their money on “brand name” items and products.

South Korea’s culture is based heavily in the humanist ideology of Confucianism. Today, Christianity is the prominent religion with Buddhism as a close second. Visitors can explore the country’s temperate climate, sweeping hills and mountains, and wide coastal plains, along with 12 UNESCO Heritage Sites.  South Korea is a member of many international organizations, including the United Nations, G-20, Association of Southeast Asian Nations Regional Forum and World Trade Organization.

***A moment of Silence to remember those we lost to Covid-19 and prayers to those who are still being treated in the hospitals all over the world.

On this special occasion, we are also remembering our beloved Honorable Councilman Michael Yun, serving 2013-2020 of Jersey City’s Ward D. 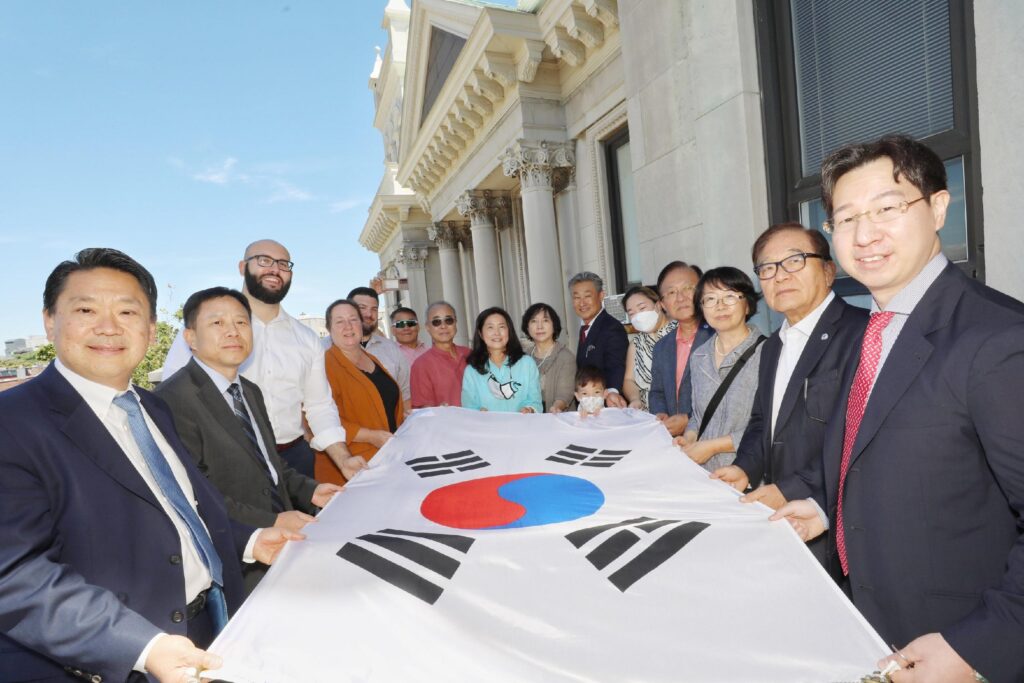 Sungho Heo, Consulate General of the Republic of Korea